In October 2007, four men from the Administrative Office – Josh Machicek, Texas A&M-CC ’06; Joe Kokojan, Oklahoma ’06; Dave Campbell, Virginia Tech ’07; and David Schmidt, Connecticut ’06 – spent nearly a month recruiting some of John Carroll’s finest Founding Fathers the new colony. These 23 men created a colony that went on to win both the coveted Greek Week Lip Sync and Greek Organization of the Year in 2008.

After several more years of similar success on campus, the time had come for the colony to be recognized as an official chapter. In May of 2010, brothers formally petitioned to charter as a chapter of Beta Theta Pi. At the 171st Convention in August of 2010, located just outside Washington, D.C., J.J. Kuczynski ’10, Andy Lane ’12, Kyle Sobh ’10, and Nathan Catalano ’12 highlighted how Betas at John Carroll have lived out the Fraternity’s mission every day and why the colony should become a chapter. After a unanimous vote of approval from the delegation of chapter presidents, the colony at John Carroll University was officially welcomed as a formal chapter, the Eta Epsilon of  chapter Beta Theta Pi.

In what was an extraordinarily rare occurrence, the General Fraternity’s Board of Trustees, led by President Tom Purinton, Kansas State ’63, and General Secretary David Schmidt, South Florida ’92, presided over the official chapter Installation Ceremony on November 6, 2010. The following “Installation Weekend” was a success with a mass, family welcome, and a reception at Canterbury Golf Club.

After officially receiving a charter, the chapter continued to prove why it deserved to bear the name of Beta Theta Pi by winning General Fraternity honors, which included two John Reily Knox awards (the highest honors bestowed upon a Beta chapter) and the Francis H. Sisson Awards for Chapter Excellence consecutively from 2011-2013.  Also, the chapter won campus awards like Fraternity of the Year in 2011 and Greek Organization of the Year again in 2012 and 2013.

Unfortunately, some brothers began turning away from the five core values that gave this order birth and the founding principles that attributed to the chapter’s success. To save the chapter, it underwent a reorganization in April of 2014. With the motto “Leadership Moving Forward,” brothers of the Eta Epsilon chapter rebounded, elected an executive board under a new structure, and began working to rebuild and improve. Attention was turned to recruiting men who will continue to leave a legacy and live out Beta Theta Pi’s values every day of their lives.

Today, the chapter continues working to improve and learn from the lessons of the past. After once again winning a Sisson award in 2015, the future looks bright for the Eta Epsilon chapter. Three years removed from the reorganization, all signs point to a success. Five fruitful classes have thus far been inducted and continue to grow closer in fraternal bond daily. The Omicron class of Fall 2015 has demonstrated how connecting as a pledge class can benefit the chapter as a whole. With most of the reorganized chapter now as alumni, it is time for the newer classes to forge a new path forward. 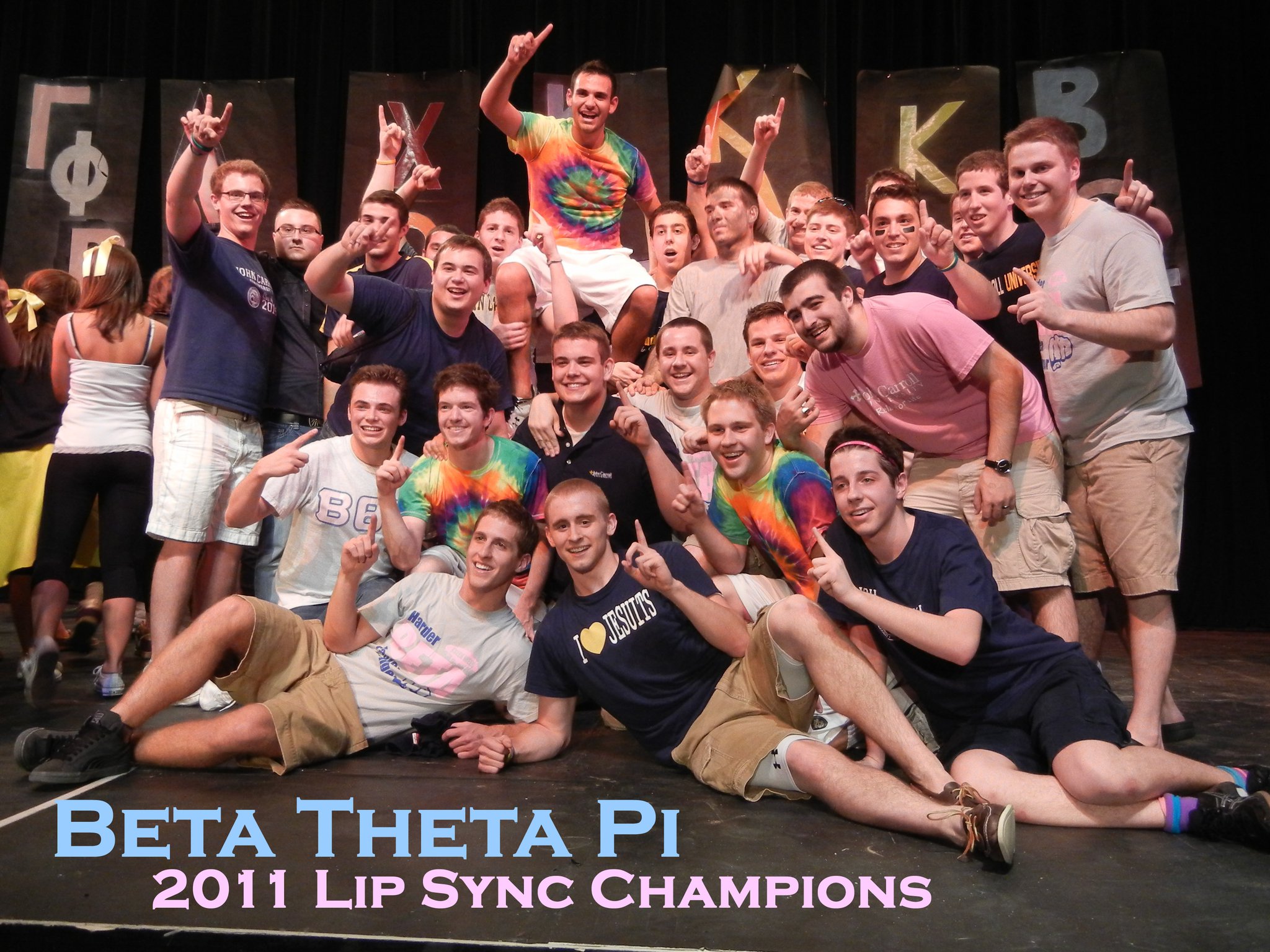 Beaudry Award- This is the highest individual honor bestowed to only one member of the graduating class, and recognizes outstanding leadership, commitment to Christian values, academic achievement, and service to the University and/or greater community.
Patrick Carpenter ’08
Peter Niro ’09
Andrew Vogel ’11
John Jackson ’13

Millor Orator- This individual is chosen after a competitive application and audition process to represent the graduating class as the only student invited to speak at Commencement exercises.
J.J. Kuczynski ’10
Andy Lane ’12
Ken Clar ’14

Leadership Legacy Award- This award recognizes up to five graduating seniors who, through their dedicated leadership and involvement, have made significant contributions to changing the campus culture in a positive way during their careers on the JCU campus.
Nick Skiviat ’12
Greg Petsche ’13
Steve Henderson ’15